Milestone at Ferguson Marine for Hull 802 as resources ramp-up

Ferguson Marine (Port Glasgow) has today announced the completion of a major milestone in the build of one of the dual fuel ferries currently under construction.

Hull 802, as the vessel is currently known, was fitted with its large bow unit which, at 100 tonnes, is the largest single unit added to the ferry’s steel hull.

In a major engineering operation involving a 15-strong team and two heavy-lift cranes, the block completes the bow structure.  This week will mark a key moment in the vessel’s progress when the final units are lifted into place, completing the main hull and steelwork and making way for the installation of the ferry’s aluminium superstructure, which is all the units that sit above the main deck.

Over the coming weeks and months, resources will ramp up to around 150 people working on Hull 802 to support the construction effort.

“Later this week, we will install the final steel block, which will complete the main hull on the vessel.  We will then implement a step change in momentum behind the build of Hull 802 with increased resources over the coming weeks and months to install the units which sit above the main deck.  By September this year, Hull 802 will look like a ferry.

“One of the key changes I have made since taking over is separating the programmes for the two dual fuel vessels.  This is to allow the programme for vessel 802 to progress, irrespective of the schedule and programme for MV Glen Sannox.  For the past year or so, most shipyard resources have been focused on MV Glen Sannox and this approach will balance that, allow us to progressively build-up resources on Hull 802 and work towards launch early next year.  My aim is to demonstrate that Ferguson Marine, in line with its historic reputation and without legacy issues, has the capability to deliver a new build vessel.” 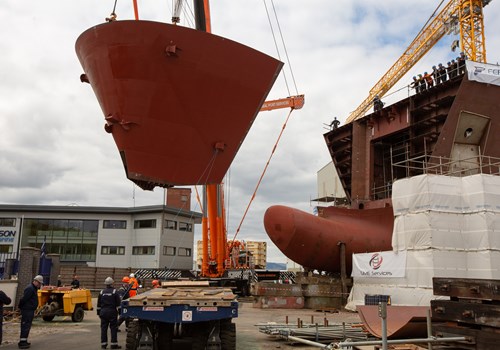 Milestone at Ferguson Marine for Hull 802 as resources ramp-up