Shipbuilding on the Clyde since 1903

Our business is stringently controlled by a robust framework of operating procedures that ensures that we regularly review performance and adopt best practice methodologies. As such, we are able to undertake continuous improvement to enhance both our organisation and the business benefits we deliver to customers.

The first recorded ship launch from the Newark Yard. 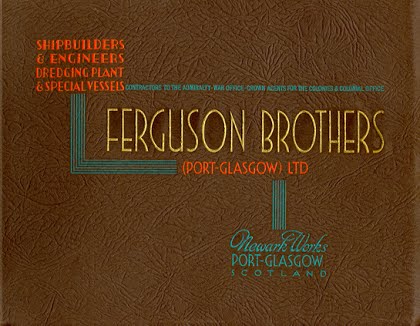 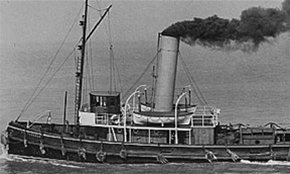 The first of eleven Diesel Kort Nozzle tugs built for Clyde Shipping Company between 1903 and 1962. 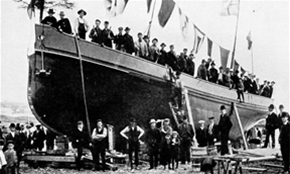 Built for export to Canada.

The Canterbury tug was launched which is still in service today. British yards were recognised as centres of shipbuilding excellence which is why the contract was awarded to Ferguson Brother’s with the vessel then travelling over 12,000 miles under her own steam to arrive at her home port in New Zealand.

Ferguson Brothers delivered on 3 tugs and 7 hopper barges for the Port of London Authority. 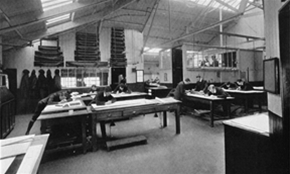 The early drawing office which gave way to a new facility with just over 60 draughtsmen.

2400 IHP steam tug, ‘Lugwig Wiener’ was launched in August complete with wireless telegraphy and submarine signalling and utilised in the First World War.

In April, new offices and a 60m machine shop were constructed by McBride of Port Glasgow and completed in October. 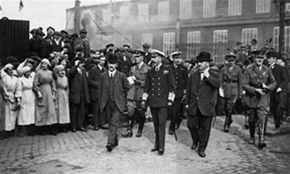 Launch of the company’s first cutter hopper suction dredger. Built to the order of the High Commissioner for the Union of South Africa, taking 4 years to build.

Yard constructed a number of tugs, dredgers, hopper barges and cargo vessels. In 1927, a twin salvage vessel was built which sailed for Perim Island in October, having 72 tonnes of portable salvage gear and girders and a bunker capacity of 200 tonnes. 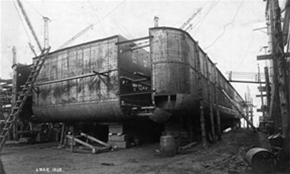 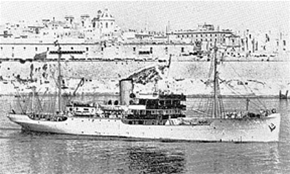 Built for the Falkland Islands.  The first ever ship to circumnavigate Antarctica in winter and responsible for the rescue of two sets of Antarctic explorer. 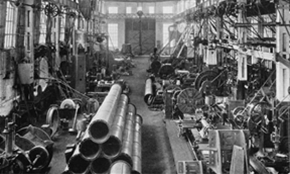 The Ferguson Brothers Machine Shop in its heyday.

Work began on “Pomeroon”, a passenger cargo vessel with it’s trials in January 1936. The yard then built the two sister vessels, “Lady Northcote” and “Barima.”

Ferguson Brothers makes a fantastic contribution to the World War II effort, building no less than 30 ships over seven years, including tunnel tugs, minesweepers, corvettes, Turkish ferries and boom defence vessels. The firm was the leading builders and designers for hull and machinery of the “Sir David Hunter” class and 6 rescue class tugs. 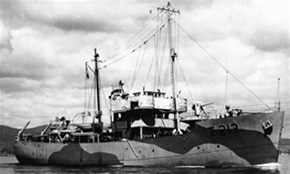 Just one of an amazing 30 shops built for the Admiralty during the second World War. 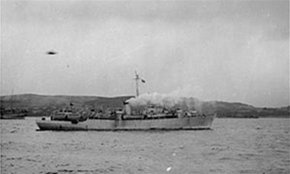 The “Empire Sorcerer” was launched in February, a unique twice screw, bow-well, combined trailing and suction cutting hopper dredger designed to load 2000 tons per hour for service in the tropics.

The company built a diesel electric power barge, “GP 2”, for oil drilling operations in Venezuela. This was the first of its type to be built in the UK. 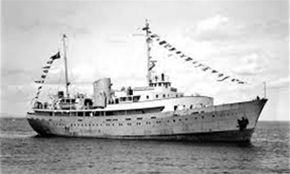 Fergusons’ had the distinction of launching the first vessel for the new state of Ghana, formally the Gold Coast, a twin screw steam tug named “Mensah Sarbah.” 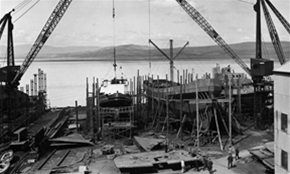 Shipbuilding on the Clyde in the 50's and 60's was slow to change, which allowed the new yards in the Far East and Europe to make a big inroads to the world market. 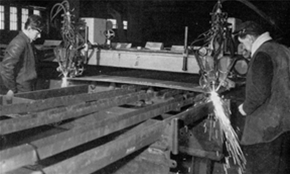 The first of three diesel electric twin screw, with twin side pipes, trailing suction hopper dredgers for the British Transport Docks Board, “Baglan”, was named and launched in May. 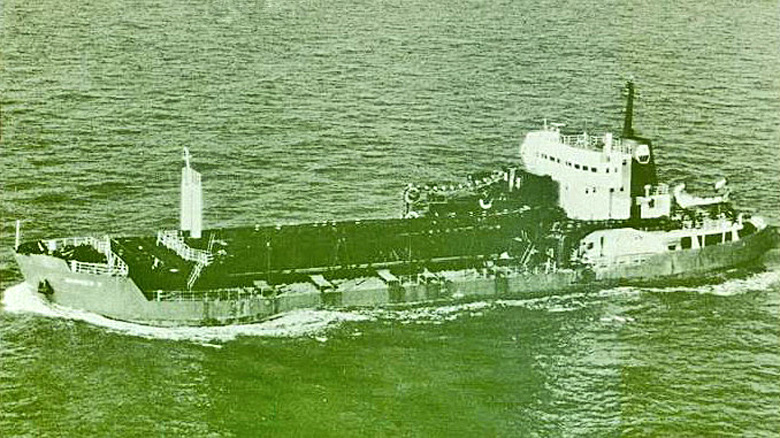 The “Marinex V”, a £1m suction hopper gravel dredger and could dredge to a depth of 46m was launched.

The yard is nationalised and subsumed into British Shipbuilders.

Ferguson Brothers merged with the Ailsa shipyard in Troon to form Ferguson-Ailsa Limited.

The grouping is split and re-privatised with Ferguson’s once again in control of its own destiny.

Clark Kincaid itself is acquired by Kvaerner and becomes Kvaerner Kincaid. 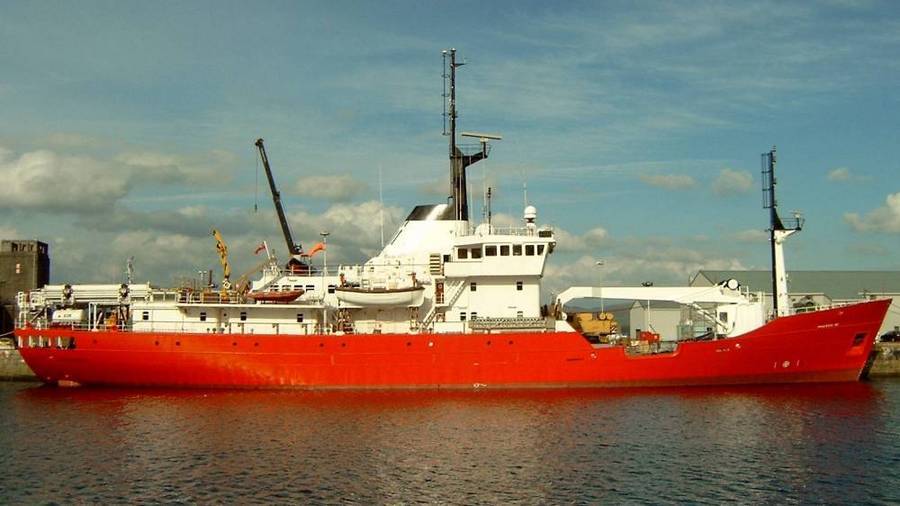 More excitement - as The Queen visits Port Glasgow and launches MV Pharos for The Northern Lighthouse Board.

An unbroken run of almost twenty years shipbuilding with many prestigious contracts including multi-million pound ferries for Caledonian MacBrayne, a roll on/roll off terminal for Western ferries, patrol vessels for the Fisheries Protection Agency, aircraft carrier modules and dredgers.

Ferguson Marine is acquired by the Holland House Electrical Group.

The Queen returns to launch the impressive MV Hebrides for Caledonian McBrayne.

In the face of strong competition from European shipbuilders, Ferguson’s win the £22m contract to build the world's first hybrid-powered ferries, creating around 100 new jobs and putting down its marker for marine innovation.

The launch of MV Hallaig, the first of the two pioneering hybrid ferries. Built for CMAL and operated by Caledonian MacBrayne, the MV Hallaig was the world's first Hybrid Ferry and operating on a low-carbon combination of diesel electric and lithium ion battery power. Despite leading the world with the Hybrid Ferry concept, a lack of long term investment in the yard and the general decline of commercial shipbuilding on the Clyde finally catch up with Ferguson’s and the company goes into administration. Clyde Blowers Capital, led by entrepreneur, Jim McColl OBE, steps in to buy the company, renaming it Ferguson Marine Engineering Ltd, saving almost 100 jobs and bringing to an immediate halt the loss of the last shipbuilders on the Clyde.

The new and revitalised Ferguson Marine wins the Scottish Government contract for a third hybrid ferry for Caledonian MacBrayne.

Clyde Blowers Capital invested an initial £12 million in the shipyard and its new management team, aiming to grow the workforce to over 400.

Ferguson Marine are awarded the £97 million (USD 150 million) contract to build two 100-metre, dual-fuel ferries for CMAL, securing the immediate future of the yard and confirming projected growth of the workforce to 400 by the end of 2016. Launch of the MV Catriona, the third Hybrid ferry for CMAL, marking the end of traditional ‘build, launch and fit-out’ shipbuilding at the yard. From this point, all vessels will be built and totally fitted out in sections, under cover in the new shed complex as part of the £12 million development scheme.

2016 - MV Catriona Delivered Ahead of Schedule This environmentally-friendly, vehicle passenger ferry is the first of two vessels which are the first LNG fuelled ferries designed and constructed in the UK, demonstrating Ferguson’s cutting-edge design and building capabilities. As part of a £25 million investment, a new state-of-the-art office facility was officially opened in Port Glasgow. Successfully led a European consortium in a bid for EU funding support to pave the way for the building and launch of the world’s first sea-going car and passenger ferry fuelled by Hydrogen.